The Old Museum Clock is a time travel device that rests in the National Museum. Andy appears to be the only person to know the powers of the clock.

The clock looks like an ordinary grandfather clock, with carvings of Triceratops, Sauropods, Therapods, a Pterosaur, dinosaur footprints and ferns. It has a gold clock face and a creature dial that both glow blue when activated.

The clock activates right before the Museum's opening time in Andy's Dinosaur Adventures and after closing time in Andy's Prehistoric Adventures, signaled by its Pterosaur cuckoo and chimes. Andy asks the clock "To the time of [the creature whose era he wants to go to]", he then gets sucked in by blue light and the clock travels in time and space to the creatures time period and location then Andy is expelled from the clock.

After about 15 minutes in ADA and several hours in APA, the clock starts chiming again indicating it is about to leave. Andy then has moments to get back to the clock otherwise it will leave without him. When standing in front, Andy gets sucked back in by blue light and travels forward in time back to the National Museum, right before opening time, and Andy is expelled again.

Sometimes on Andy's and the Clock's time travel journeys, the Clock has been involved in some incidents:

Andy about to time travel in the Clock.

Andy's view of the time traveling.

Andy inside the clock while traveling.

The clock returning to the Museum.

Andy jumping out of the clock.
Add a photo to this gallery 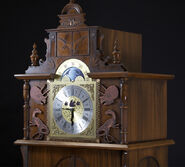 Clock head view
Add a photo to this gallery
Retrieved from "https://andysfandomadventures.fandom.com/wiki/The_Old_Museum_Clock?oldid=779"
Community content is available under CC-BY-SA unless otherwise noted.